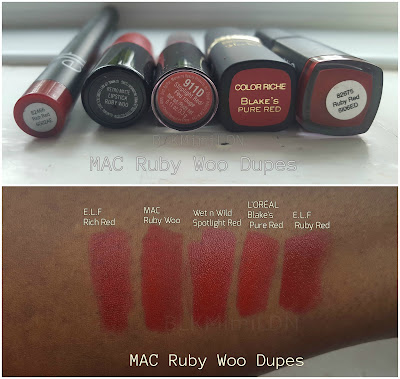 MAC's Ruby Woo is the standard bearer for red lipstick among many women. Its blue undertones enable it to suit women with the deepest black afro to those with the blondest strands. 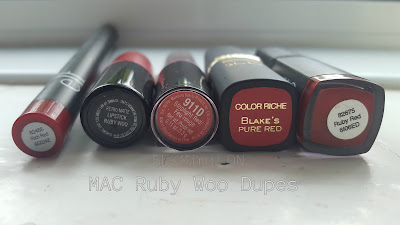 When I first started getting into makeup I tried and tried to like MAC's Ruby Woo, seeing it on women whom I would stop to compliment (I am that chick- if I like what you're wearing I will stop you and let you know #playitforward), but in store I would struggle to purchase it as it was well, dry. Dry as hell. I really hated the way the dryness highlighted very line / wrinkle and it settled on my lips. I searched online for dupes of the colour in an attempt to circumvent the dry texture but ended up purchasing it early in the summer 2017. My online search was frustrated in the the fact that dupes were shown on skin shades that were very dissimilar to that of my own. The shades came out different on me and so I thought it was important to post the lipsticks that I considered to be the closest to MAC's Ruby Woo. 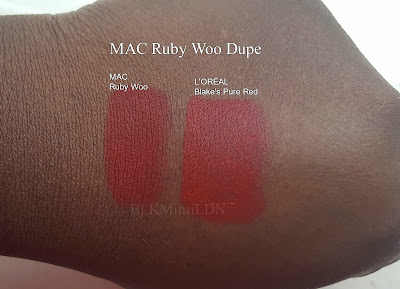 The closest dupe in terms of both colour and finish is hands down L'Oreal's Blake's Pure red. I discovered this by accident whilst getting ready. I had been rushing to get ready and Ruby Woo was tugging at my lips, frustrated I threw the bullet down and searched for another red I thought would be impact on my all back outfit - had it of been the height of summer I would have rocked MAC's Lady Danger.  I had searched for Blake's Red after seeing it on a post by Erica from the Glamorous Gleam (check her out, I love her),  eventually purchasing it from eBay as it is no longer in Superdrug. I placed the colour on top and it was a perfect match down to the finish. In my opinion the Pure red is better as it is less drying that Ruby Woo, as you can see from the above swatch, it doesn't settle into lines as readily as  Ruby Woo which is why it appears slightly glossier. However, they are a perfect match. 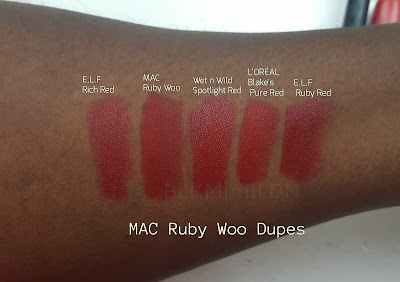 The other lipsticks are close matches, although their moisturising formulas make them appear glossy in the picture. Wet n Wild's Spotlight Red and E.L.F's Ruby Red have excellent pigmentation, with E.L.F's Rich Red settling down to a nice stain on my lips after a few hours of wear.

I make sure I exfoliate my lips before wearing Ruby Woo. With these reds I need to ensure that I line my lips and apply with a lip brush - blotting in-between to build up the colour and intensity. I also make sure to moisturise my lips with carmex / blistex first, blotting off any excess. This helps to keep some of the dryness at bay for a few hours.

What are your favourite reds?
Posted by BLKMimiLDN at Thursday, April 26, 2018 No comments: 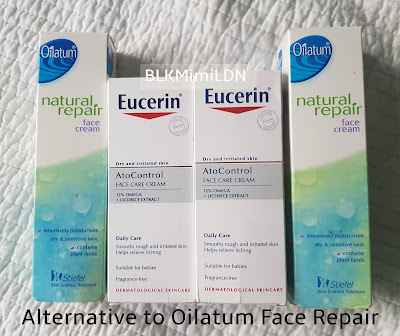 I thought it best to post the alternative I have found for Oilatum Face Repair, Eucerin AtoControl Face Care Cream.

I tried so many creams and they didn't cut the mustard. Face Repair sunk into my skin and didn't fade away during the day. Eucerin AtoControl Face Care Cream was the only cream I could still feel after a long day in these city streets. The cream wasn’t thick so it didn’t interfere with my make up or have an annoyingly tacky texture. The smell was non-existent so not offensive. I have made repeated repurchases despite the fact that one tube will last me for at least two months.

It is pretty costly so I try and purchase when Boots has them on offer.

Company's claims:
Using the ingredients from botanical origin, the formula with a combination of highly concentrated Omega fatty acids (Evening Primrose Oil and Grape Seed Oil) and soothing Licorice Extract replenishes the skin, helping to restore its natural barrier, making it more resilient. With the regular use the skin condition is noticeably improved.Results:The easily absorbed oil-in-water cream hydrates, soothes and reduces roughness. Itch and tightness are relieved. The skin feels soft and is noticeably smoothed.Clinical and dermatological studies confirm: Very good efficacy and skin compatibility proven to be suitable for even atopic skin. Appropriate for use for babies and children even with dry atopic skin.The complete range of cleansing and care products is free from parabens, fragrance and colourants.

What is your favourite face cream?

Posted by BLKMimiLDN at Wednesday, April 25, 2018 No comments:

My long-loved Oilatum Face Repair Cream has been discontinued *cries*.

For as long as I could remember I have suffered with eczema, going through a period in secondary school where I had over 80% of my body, including my face, covered with lesions. Friends and family know that I have strange habits when it comes to my skin. My skin can be really inflamed, dry and irritated quite quickly. When I stay in hotels I bring my own pillowcases!

I don't like change when it comes to skin care.

Last year I heard rumours and saw the signs.......Boots were no longer stocking the cream so I started hording stocks from online pharmacies in a bit to starve off the inevitable. I gradually gave up and emailed global giants, GSK (manufacturers of the product)for the details.

The response I received was:

"Thank you for your email regarding Oilatum.


Regarding your enquiry about the availability of Oilatum Natural Repair Face Cream, we can confirm that it has been discontinued and is no longer available. I am sorry that I am unable to bring you more positive news."


Naturally I was gutted as I loved the fact that the cream allowed my skin to feel moisturised throughout the day, not becoming inflamed or tight. It was really hard to find something that would do all three: moisturise, reduce inflammation and last throughout the day.

This conformation stressed me out as I was panicking over what other cream could be suitable. I struggled at first but it wasn't all doom and gloom - I'll post my replacement for this cream soon! 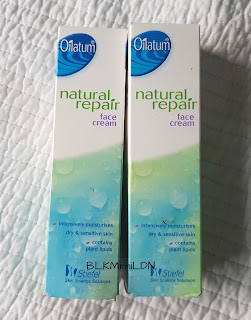 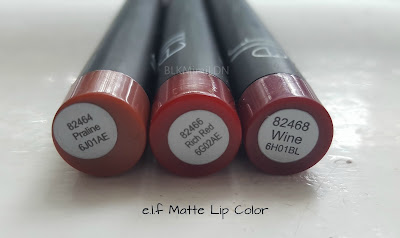 Eyes Lip Face (e.l.f) launched recently in Superdrug last year and I picked up three Studio lip Matte Lip Colours in Praline, Rich Red and Wine. A fan of E.L.F, I'd heard good things about them so I wanted to pick them up.

Praline - medium pink brown - had been touted as a nice nude for black women but it barely made an stain on my lips. :(

Rich Red - A bright cool red-  in particular had been compared with NAR;s Dragon Girl / MAC's Ruby Woo as it's a beautiful blue tone red. Popped wonderfully against my skin.

Wine - deep berry- was a safe bet, pretty and sweet on.

Overall I enjoyed Rich Red and Wine. The colour pay off was excellent  and the pencil format allowed for easy application. The price point at £4.50 was pretty decent too (although I noticed that the price is now £1.80 on ELF's site ). 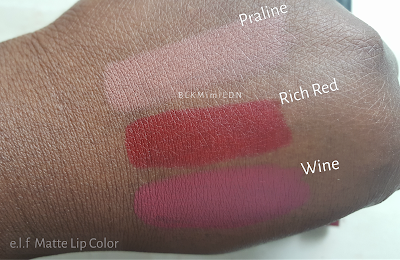 Disappointingly I have had a fruitless search this weekend when seeking lipstick swatches on someone of my skin tone (or even just non white). This really hit home for me, WOC need to continue posting swatches and providing reviews where possible on the internet so that we can be represented.

I recalled that I hadn't posted these shades of my MAC Lip Pencils. I am now including swatches of MAC Lip Pencils Redd, Cherry, Brick & Beet to add to my previous post. 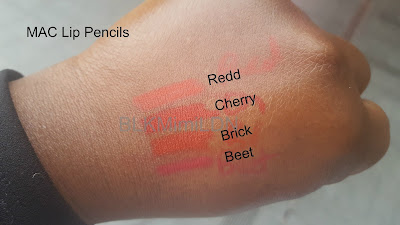 I have written the descriptions MAC uses below and I have suggested complimentary lipsticks in brackets: 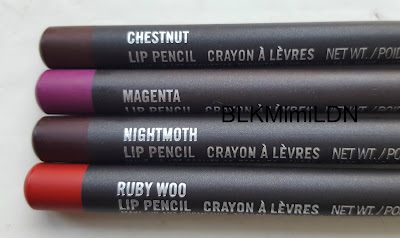 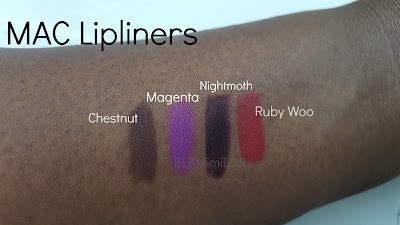 This is a continuation of my posts on lip pencils / liners that I love. There was no way that MAC couldn't get a mention.  However, whilst getting the photos together for this series I started to change my mind and want to include other pencils swatches, not necessarily my favorite but shades I struggled to find swatches on the internet on dark brown women.  Confession time - I quickly became lazy and so swatched the reds below quickly.

Chestnut is a must for every dark black woman as it is an excellent shade of brown, pigmented to the gods and blends in perfectly with any lipstick or gloss.

Magenta I like to wear alone as I adore the blue purple shade.

Nightmoth - she is my b***h right here! I love the vampy, deep purple shade and her ability to  switch up my pinks, reds and purple lipsticks alike.

Ruby Woo is a hard one as I hate the dryness of the lipstick and so refused to purchase it (I go through phases where I go in store to purchase it but leave with something else).  I bought this shade to try and circumvent the lipstick and am disappointed as it is not as pigmented as I expected and find that it drags when applying it. Nice blue- red tone but I will not be repurchasing.

The price point for the lip pencils is an issue, specifically as there are comparable (credible) dupes by other brands (NYX), however the pigmentation on some of the shades such as Chestnut have me running back for a repurchase.


What are your favourite MAC lip pencils? Let me know as I need to expand my collection.

Posted by BLKMimiLDN at Saturday, June 24, 2017 No comments:

Makeup Revolution Highlighters and Bronzers are a great low cost option, with exceptional colour pay-off. I picked mine during one of Superdrug's 3 for 2 events, £4 each.

Rock on World
I was instantly drawn to Rock on World as it was a hyped dupe for MAC's MSF Gold Deposit. The shade did'n't disappoint at all.

Golden Lights
Golden Lights was a interesting highlighter as it looks scary white (I swatched it heavily)  but pretty on - light hand is required.

Rose Gold Lights
I adore this rosy tone highlighter. Again a light hand is required as the shades are all pigmented. 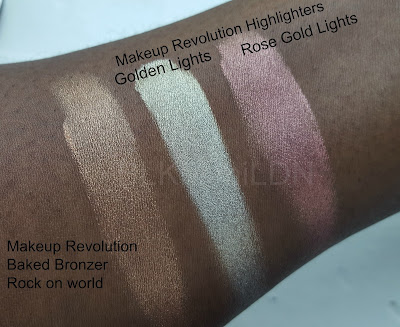 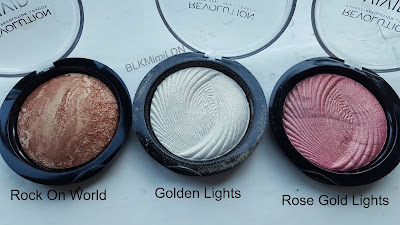 Have you tried Makeup Revolution's Highlighter / Bronzers? What are your thoughts

Posted by BLKMimiLDN at Thursday, June 22, 2017 No comments:

BLKMimiLDN
Hi, I am a London based beauty and plus-size fashion enthusiast. I use this space to share my interests.